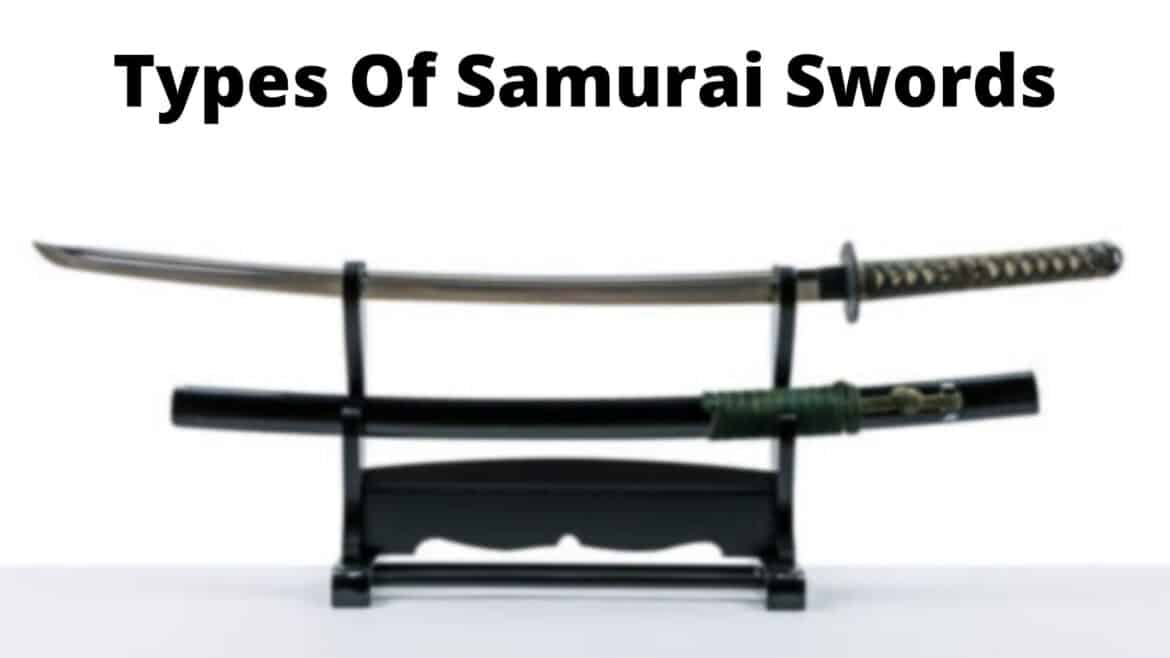 Wondering what are the different types of Japanese swords? Well, check out this list of different legendary Japanese sword names as well as their functions. Read further to know more.

A Brief History of Types of Japanese Swords

Let’s talk a little bit about martial arts history, before knowing the types of Japanese swords and their purposes.

The Japanese sword is considered to be a fine example of cutting weapons in the history of the world military. The various types of Japanese swords that are available differ from each other in their shape, size, the field of application, and method of manufacture.

A sword usually has three parts to it: blade, scabbard, and mei. The blade is the most important part of the sword. Each blade has its own distinctive profile that is dependent and based on the swordsmith and the construction method.

Also, it was very time-consuming to forge the blade and it usually took swordsmiths weeks to months to complete one blade. It was, therefore, considered to be a very sacred piece of art.

The second part is the Scabbard, which is called Saya in Japanese. Tsuba, which is the third part of the sword, is the handguard piece with an intricate design on it.

There are also other parts of a sword that are equally intricately designed. These parts include mountings, blade collar, and scabbard wedge, decorative grip swells, handle collar, and cap.

This is probably the most famous of all types of Japanese swords. The reason why it is so popular is also because of its use in modern pop culture. you will see Katana being used in anime movies as well as modern Samurai movies.

The Katana Sword is also known as the Samurai sword. When translated in English Katana means sword. The Katana was a very important tool and equipment of every Samurai in ancient and feudal Japan.

You can easily distinguish this sword from other swords because of its characteristics. The Katana has a slightly curved and single-edged blade. Katana’s length is almost 60 cm.

You must have seen the handle of European swords; these European swords do not have a long handle. However, the Katana has a long grip that lets you use both your hands to hold it. To protect the hands of the warrior either a circular or squared guard is used.

The Katana is known worldwide for its superior and excellent cutting ability and sharpness. Also, using a Katana is no joke. As compared to all the medieval swords, a Katana can easily chop off the entire limb.

As compared to the Katana, the Tachi has a curvier and longer blade. It is because of this reason that the sword is named so.

When translated in English, Tachi means ‘big sword’. This sword was used quite extensively before the 15th century. It is believed that this sword is the predecessor of the famous Katana swords.

This is the sword that was used by Japan’s warrior class and was used on horseback. These types of Japanese swords are used as war swords have an extra length to it.

The blade of the sword is also curvier, which comes in extremely handy during wartime. The curvy blade helped the warriors to cut the foot of enemy soldiers.

The warriors used to wear the Tachi suspended with the edge facing downwards. This way of carrying the Tachi also helps you differentiate it from a Katana.

Despite being so ancient, this sword is quite special. Unlike most other swords, this one was neither differentially hardened nor folded.

Because it has a very old history, it is believed that the technique that was used for tempering and folding swords was not used commonly.

It is a sword with a basic style. It has a one-edged and straight blade. I am sure you must have seen this type of sword in classic Japanese movies. This type of sword was used on foot for slashing or stabbing the enemy. The warriors wore this sword hung from the waist.

This sword, when translated, means ‘side insertion’. It is yet another traditional Japanese sword that was used as a backup weapon. It is also believed that the early warriors used this sword as a sidearm.

Usually, the Wakizashi sword is paired with the Katana by the Japanese samurai. By pairing these two types of Japanese swords together, they form a Daisho, which means ‘large and small’ when translated.

The properties and features of the Wakizashi sword are quite similar to that of a Katana. However, unlike the Katana, the length of Wakizashi is shorter.

The average length of the blade for the Wakizashi sword falls between 40 and 60 cm. This is the sword that was the chosen option when fighting in confined spaces. The sword was also used at the same time along with the Katana.

Both of the swords, Katana and Wakizashi, have a religious notion attached to them as well. These swords are also symbols of samurai integrity and worth.

Also, Wakizashi is also used to commit ritual suicide, which is known as Seppuku. This ritual that the sword had to perform helped it earn the title of ‘Honor Blade’.

The samurai also would have worn this sword right from the moment he woke up until the moment he went back to sleep. However, even while sleeping, the sword was always under the samurai’s pillow.

Nodachi, when translated to English, means ‘field sword’ and it is quite a huge two-handed sword that is used in Japan. When it comes to its appearance, it looks almost similar to a Tachi sword. However, unlike Tachi, this sword is larger and longer.

Because the Tachi is large in size, it is most commonly used by foot soldiers on open battlefields. The soldiers carry this sword with the flat edge against their shoulders. The blade also has to face outward.

Kodachi is one of the types of Japanese swords that is commonly used by the samurai class of feudal Japan. The shape of this sword is almost similar to the Tachi.

The length and size of this sword, however, are shorter and smaller. Usually, this sword is about 60 cm long, or even less.

When we look at the features of Kodachi, we may often mistake it for Wakizashi because of the similarity in their length, size, and using techniques.

Kodachi is normally used as a companion sword or as a self-defense weapon. It is also the perfect weapon for regular Japanese citizens. This sword was most commonly used by travelers, caravans, and merchants.

This is the sword that was adopted and adapted by Japanese army officers. The Shin Gunto was a part of the Imperial Japanese army’s uniform. This was the norm until the end of World War II. Most of the Shin Gunto swords were fitted with machine-made blades.

You must know all about daggers. This is a Japanese-styled dagger, which used to be known as the stabbing weapon in the past. These are one of the sharpest types of Japanese swords.

The dagger features either a single or a double-edged blade. The average length of this dagger is not more than 12 inches. Also, this sword does not have a curved blade. Rather, it is straight and is usually an accompaniment to the Katana.

The wearers of Tanto can carry it as a self-defense weapon at all times. You do not need to leave it outside the door when paying a visit to somebody.

Ninja sword is also known as Ninjaken or Shinobigatana. This is the sword that was used by the Shinobi of feudal Japan.

I love this beautifully carved sword that has distinctive features as compared to other types of Japanese swords. It is sleek and straight and comes with a square guard.

These are types of Japanese swords that came at the beginning of the 16th century. This is a weapon that you will most commonly see being used by the samurai class. The blade of this sword can be between 60 and 70 cm.

The sword is short and light, which makes it extremely convenient for you to hold with just one hand. You may get confused between the Uchigatana and the Tachi. However, these two types of swords have different characteristics that can help you differentiate between the two.

This is an extremely special type of sword. It has a straight and double-edged blade. You may feel that this sword closely resembles the Chinese Jian. It is believed that this sword was one of the three Imperial Regalia of Japan.

What are the names of the three samurai swords?

Samurais, in Japan, were considered to be the best warriors. They belonged to the military class and later, they rose up in the hierarchy and became the highest class.
The samurai had a wide range of weapons such as spears, guns, and bows and arrows. However, the main weapon that was used by the samurais was the sword.
When we talk about the swords used by the samurai, there are three. These are Katana, Wakizashi, and Tanto.

What is a big katana called?

The big katana is known as an odachi or nodachi. This is a traditional Japanese sword that used to be used by the samurai class of feudal Japan. It’s one of the most known types of Japanese swords.

Daishoo is the formal set of swords, which contains the katana and the wakizashi or tsurugi. Both the swords are worn with the cutting edge facing up. The short sword was worn by the samurai even when they were indoors.

What is the deadliest Japanese sword?

The deadliest Japanese sword is Nanbokucho period Katana. Literally, it means Old Sword, but it was not the first sword to be made in the period. The period began in 1336 and ended in 1392. The most famous swords to be made during this period are late Kamakura period swords and earlier Muromachi period swords.

The Various Types of Japanese Swords

There are several different types of Japanese swords, each with its own distinctive features. These also have their own set of advantages and disadvantages.

For the Japanese people, their swords are a symbol of their pride. I hope this guide helped you get a better understanding of the various types of Japanese swords.

12 Types Of Traditional Japanese Dolls and Its History