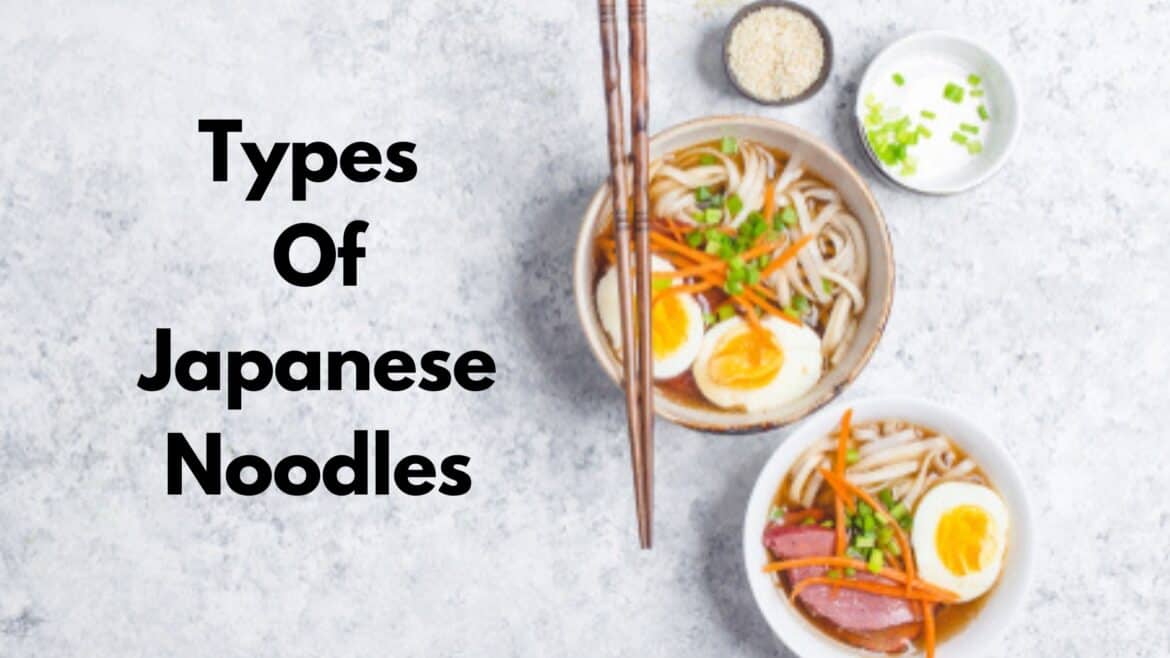 When we talk of staple food in Japan, noodles take a high position. It is considered to be a convenient food that can be eaten and enjoyed in several different ways. There is never a single way of eating the different types of Japanese noodles.

You can have it chilled with dipping sauces, in soups, stir-fried, or in salads. There are so many different varieties of noodles available. Today, I have brought to you some of the types of Japanese noodles that you can find.

I love ramen, and I am sure most of you feel the same way about it. Ramen is probably one of the most famous Japanese noodles that you can find. Ramen is a wheat-based noodle that is thin and often curly and wavy.

The color of ramen is a little on the yellow side. The ingredients used in making Ramen include wheat flour, salt, water, and alkaline water. Before rolling, the dough is allowed to rise. It is believed that the noodles are imported from China and so, they are sometimes known as Chinese soba, or chuka soba.

There are a variety of ways in which you can enjoy your ramen. But most often, ramen is taken as a part of a soup that is made from chicken or pork stock. Other things that are added as toppings include katsuobushi, niboshi, shiitake mushrooms, and onions.

This is a cloudy white-colored soup that has a thick broth that is made using pork bones.

This is one of the most basic forms of ramen soups available. It has a clear brown broth that is made with some type of stock. It also makes use of plenty of soy sauce. For toppings, you can use marinated bamboo shoots, green onions, kamaboko, boiled eggs, and bean sprouts.

This is a yellowish broth that is a little lighter in color as compared to other ramen salt and broth.  broths. It is a very simple broth that is made using only salt and broth. The flavor is very light. Also, when eating Shio ramen, make sure you are using straight noodles instead of curly ones.

If you are looking for the thickest Japanese noodles, look no further. These white noodles are made of wheat and are best eaten chilled. These noodles taste best when eaten chilled and dipped in sauces. You can also serve it in a broth soup. The most simple way of eating Udon is by pairing it up with thin slices of green onions and a slice of kamaboko.

Another type is known as ‘fox udon’, also known as Kitsune udon, in which you use sweetened aburaage as a topping. For Tanuki Udon, or ‘raccoon udon’, you use tempura batter flakes as toppings. Tempura udon has tempura as toppings. You may also see that kakiage is used sometimes. Chikara udon uses mochi, and Stamina udon uses meat, egg, and vegetables as toppings.

Udon is also a very popular choice in nabe dishes. In Nagoya, we can see that the Udon noodles are eaten in miso soup, and this helps create a dish called miso-nikomi udon.

In Yamanashi, Hoto udon is extremely famous. These are the thickest noodles that you can get and these are cooked in a thick miso soup. A lot of vegetables are also used in the preparation of these noodles.

Another kind of noodles available in Japan is known as Soba, or buckwheat noodles. These noodles are made with a mixture of buckwheat and wheat flour. If you are sensitive to gluten, you may want to look for soba that is made using 100 percent buckwheat. For those with gluten sensitivity, these may be the only Japanese noodles you may be able to eat.

There are various ways in which you can enjoy soba. You can eat them chilled or served in a soup.

The chilled soba noodles are known as Zaru-soba. The chilled soba is served n a bamboo tray along with bits of nori seaweed and green onions. You eat it by dipping it in tsuyu.

Many people drink soba yu, the water in which the soba was cooked, after eating the noodles. They love mixing the leftover tsuyu in it.

There are various toppings that are used in chilled soba. Some of the most common ones include tororo, which is a puree of yamaimo and grated daikon. For warm soba, the toppings include tempura, sansai (mountain vegetables), and duck.

If you are acquainted with the New Year traditions of Japan, you would know that the Japanese love eating soba as a part of their traditional New Year’s meal. This practice has several meanings attached to it. It is believed that soba is eaten on the New Year for long and healthy life.

Yakisoba is made using wheat flour noodles and is stir-fried. Just because the name contains ‘soba’ in it, it does not mean that it uses buckwheat flour. The yakisoba noodles are quite similar to ramen. You use several toppings to make these noodles delicious. These include small pieces of pork, cabbage, onions, and carrots. Yakisoba sauce, salt, and pepper are used to enhance the flavors.

Yakisoba is also a very popular street food and is very common in matsuri and yatai regions in Japan. It is topped with green seaweed powder, red pickled ginger, bonito flakes, and mayonnaise to give the noodles a distinct and succulent flavor.

Somen is most commonly eaten cold and is made of wheat flour. Since it is best enjoyed cold, it is extremely popular during the hot summer months. You will also find people eating somen in warm soup during the winters. This is known as nyumen.

You do not need to make somen in a fancy manner. It is whipped up quite easily and using the most basic ingredients. It is first cooked and dipped in tsuyu and then it is chilled in ice. The sauce used is usually a katsuobshi-based sauce. Onion, ginger, or myoga are used as toppings.

The most popular and fun way of eating somen during the summer is as flowing somen, which is known as nagashi-somen. You may have seen several animated shows or movies where noodles are dropped down a long bamboo flume. The diners need to catch these flowing noodles and dip them in tsuyu before enjoying it. It is quite a popular way of enjoying these noodles. If you happen to be in Japan during the summertime, do not miss out on this fun.

Hiyamugi has a thickness that is more than somen but less than udon. The way these noodles are cooked and served is also quite similar to somen and udon. You can also see that these noodles are not always white. You will see that green or pink colored noodles are often mixed with these.

Shirataki noodles do not have calories in them, which is why they have become extremely popular all across the planet as a weight-loss food. These are thin and translucent noodles that are made from konjac yam. These noodles are low in carbohydrates and calories, but quite high in dietary fiber.

Shirataki does not have much flavor in it, so you can play with your cooking. It is quite versatile to cook these. You can prepare these noodles the same way you prepare other noodles. However, the most common way in which Shirataki is used is in sukiyaki, nikujaga, and other stewed noodles.

These are glass noodles that are made using potato starch. These are quite similar to Chinese glass noodles. The most popular way of eating Harusame noodles is in salads or in hot pot dishes.

Which is healthier: Soba or Ramen?

Soba and ramen both are extremely popular variants of Japanese noodles, but if we look at these from a health point of view, only one steals the show.

Also, these are very versatile when it comes to cooking and using the toppings. But that is not all. Soba noodles are also extremely healthy, especially when compared to ramen. When you look at the nutritional value of soba noodles, you will find yourself replacing every block of ramen in your kitchen with soba.

The best Japanese noodles for you!

What are traditional Japanese noodles?

Wheat flour is used to make the thick and chewy Japanese noodles called Udon. Its round shape and chewy texture make it a favorite among children and adults. It is common to serve udon noodles in a noodle soup made from dashi, soy sauce, and mirin sauce, known as kake udon.

A very thin, whitish and wheat based noodle known as Sōmen noodles. It is not unusual to serve them chilled in the summertime with dipping sauces although they can be used in soups and other hot dishes as well. Hiyamugi and udon noodles have similar properties to Sōmen noodles, but Sōmen noodles are mostly thin.

What are thick Japanese noodles called?

The thick noodles of Japan are called Udon. The noodles are made from wheat flour, and they are very popular in Japanese cuisine. Japanese consider the noodles to be a comfort food of sorts.

What are hibachi noodles called?

Yakisoba noodles are traditionally used for making Hibachi noodles. You can also use Ramen or Udon noodle soup if they are available.