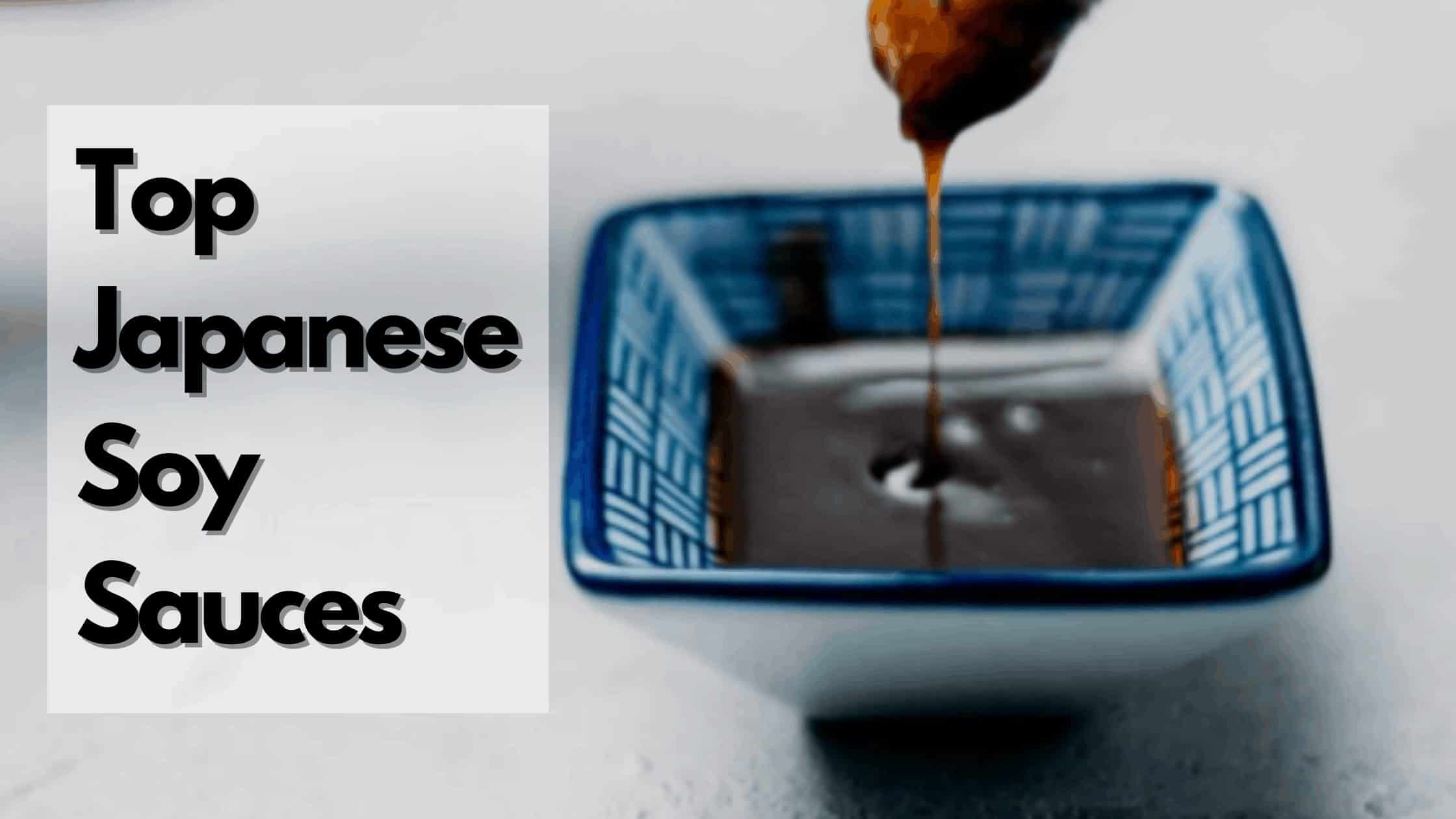 Japanese soy sauces are of several types, each with a different flavor, depth, and color. Some work best when heated in a pan while there are some that are the best when poured straight into a sauce dish. You can find your preferred flavor from the tons of options available.

One of the best Japanese soy sauces brands is Kikkoman soy sauce. It’s very popular in Japan and has different varieties of soy sauces.

Now, whether you love Japanese cuisine or you want to cook and bring the authentic flavors of Japan on your table, you need the best Japanese Soy sauce. To ease out your work, we have brought together the 10 best Japanese soy sauces for you. Check them out below!

Shiro shoyu is a very light type of Japanese soy sauce because it contains very little soy bean and is mostly brewed with wheat. It’s because of this it gets its very light color (dashi color). When it comes to flavor, it’s very mild and sweet.

Tamari soy sauce pairs extremely well with dishes like sushi, sashimi, and senbei. This type of Japanese sauce is pretty dark and is especially popular in the Chubu region of Japan. Tamari soy sauce, unlike other Japanese soy sauces, is made without wheat because of which it has a very deep umami flavor.

Genen shoyu is made by specially fermenting koikuchi to reduce the salt content by almost 50%. But this process still retains the flavor.

How to Choose the Right Japanese Soy Sauce?

How Is Japanese Soy Sauce Made?

Which is the best Japanese Soy Sauce?

If you do not know what soy sauce to get, you can always turn to YamFearoku Kiku Bishio Soy Sauce. It is probably one of the best Japanese soy sauce brands out there. This soy sauce is unique in that it is fermented and aged in 100-year-old barrels.

This brings out a rich and complex flavor that is smooth and mellow. There are no sharp notes to the flavor that may overpower a dish. The soy sauce is aged for four years, which makes the price of it a little more expensive than your regular soy sauce from the grocery store. However, it really makes your special occasions more flavorful.

This dark soy sauce has intense color and flavor. You do not need a lot of this sauce to bring out the flavor you are looking for. The consistency of the sauce is thicker than most typical soy sauces, so it clings to food a little better. You can use this soy sauce to drizzle over your vegetables or as an ingredient in a dipping sauce.

Soy sauce can literally change the whole game with its addictive and delicious flavor. However, soy sauces are also incredibly salty. So, if you need to keep a check on your sodium consumption, you may want to check out the Kikkoman Less Sodium soy sauce.

The soy sauce has the same umami flavor we love, just with less sodium. You can get a 10-ounce bottle just to check how it suits your needs. Also, Kikkoman is one of the best Japanese soy sauce brands so you can be rest assured that it’s of top quality!

Tamari Gluten-free soy sauce has little to no wheat in it. So, if you are allergic to gluten or are following a gluten-free diet, this is the ultimate and the safest choice for you.

The saltiness is also less than what you would normally expect in a soy sauce. The consistency is also thicker, which makes it work perfectly as a dipping sauce. You can also use it to try in stir fry, coleslaw, or as part of a marinade for your meat.

You may think that just because this soy sauce is mushroom flavored, it is only great as a specialty product. But you will be surprised and glad to know that it is quite versatile. When you taste it, you will not be able to pick out the mushroom flavor, but you will get that savoriness and will come to love it. This mushroom-flavored dark soy sauce has a lot of flavors packed into it, so you do not need a lot of it.

Nama Shoyu is a Japanese soy sauce that will remind you of Chinese-style soy sauces you are familiar with. This one from Oshawa is aged for two summers in cedar kegs, which brings out the complex flavor in it.

The soy sauce is unpasteurized, so it retains the enzymes from fermentation. Since the process involved in making this soy sauce uses less salt, it is bound to be less in sodium.

This makes it a great option if you are keeping a check on your sodium intake without compromising on the flavor. The soy sauce is also organic, kosher, and contains no added preservatives.

Who said soy sauces cannot be citrusy? The Ponzu soy sauce is a citrus-flavored soy sauce that works great when used in dressings, as a dipping sauce, and as a part of a marinade. The citrus adds a punch of tanginess and acidity to your regular soy sauces. It really helps brighten up a dish and add a fun element to it.

This soy sauce works well with delicate flavors such as seafood and chicken. But you do not have to limit yourself to just these dishes, you can also use this soy sauce to add a punchy flavor to pork or beef dishes.

Ebara Yakiniku Soy Sauce is a kind of sauce for Japanese BBQ. It works well as a dip for grilled meat, vegetables, and tofu. This soy sauce is viscous in consistency and has a sweet and strong taste. It is a dark soy sauce that will definitely enhance the flavor of your dishes.

Kikkoman Hon Tsuyu works as a dipping sauce or soup base. You can use this in noodle dishes like soba or udon to get that perfect taste. It is made from soy sauce, sake, mirin, sea kelp, and dried bonito flakes.

The soy sauce works great as a dipping sauce for tempura. The bottle contains a concentrated version. You may want to read the instructions and dilute it accordingly.

Kamada Dashi is a soy sauce with a rich flavor and is the perfect blend of dashi (cooking stock made from kelp and dried bonito), soy sauce, and mirin. These three seasonings come together to give you a wonderful taste.

Dashi soy sauce is rich in umami flavor and is a sweeter version of your regular soy sauce. It is a versatile Japanese sweet soy sauce that you can add to all kinds of dishes to enhance the flavor and bring out the best in it.

Domestic production of this type makes up around 80% of total production and is the most common. Beyond saltiness, it has deep umami flavors, rounded sweetness, refreshing acidity, and bitterness that ties the flavors together. It is a versatile condiment that can be used either in cooking or at the table.

The production of this light-colored soy sauce is mostly based in the Kansai region, which accounts for around 10% of domestic production. To make the fermentation and maturation process more gradual, it uses around 10% more salt than regular soy sauce.

In order to bring out the original flavors of the ingredients, its color and fragrance are reduced. Cooking with it preserves the flavor and color of food, such as sugar-boiled stews or takiawase, which is a dish that is prepared separately, but served together.

Originally from the Hekinan district of Aichi prefecture, this pale amber-colored soy sauce is even lighter than light color sauce. Taste-wise, it’s bland, but incredibly sweet, and it’s got a unique smell. In Japanese cuisine, it is used to flavor dishes such as soups and chawanmushi egg custard. Other uses for it include crackers, pickles, and other foods. It is primarily made up of wheat with very little soybeans.

It is produced in Yamaguchi prefecture in an area extending from San-in region to Kyushu region. This type of soy sauce is referred to as “refermented” because it is blended with other soy sauces, rather than brewed with the koji alone. Despite its intense color and pleasing taste, it is also known as “sweet soy sauce”. In general, it is used to flavor sashimi, sushi, chilled tofu, etc.

Chubu is the region that mainly produces this soy sauce. A distinctive smell, thick umami, and thickness are its characteristics. This sauce has long been known as “sashimi tamari” because a lot of sushi and sashimi is served with it.This product exhibits a pleasing red tint when heated, and it is commonly used in grilling, boiling in soy sauce, and making rice crackers.

Unless you love any and every health-related buzzword for the simple reason that it makes you feel better about yourself, than go ahead and use it.

It’s extremely important store soy sauce in the right away in order to maintain its flavor, aroma, and richness.

What is Japanese soy sauce?

Soy sauce was brought to Japan by Buddhist monks, somewhere around the 7th century. It first originated in China. When it reached Japan, the Japanese made improvements by the end of the 13th century. In addition to soybean, the Japanese started adding wheat in equal parts. The fermentation process and time also increased. Since then, the fermentation process of soy sauce has not changed much.

What is the difference between Japanese and Chinese soy sauce?

What is Japanese soy sauce used for?

Types Of Japanese Rice Crackers You Have To Try!